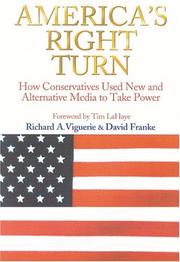 Published 2004 by Bonus Books in Chicago .
Written in English

"Anyone who teaches American History will find William C. Berman's book a useful source in preparing lectures on the politics of the s, s, and s." — American Historical Review " A very good, concise and highly readable account of the rise of the 'New Right.   In his new book, Pity the Billionaire: The Hard-Times Swindle and the Unlikely Comeback of the Right, he looks to the Great Depression and the protests it spawned — farm strikes in Iowa, World War I vets occupying tent cities in Washington — for a model of how society “should” rise up to meet economic calamity. By Richard A Viguerie, CHQ Chairman All total, ActBlue served as the conduit for raising more than $ billion in the election cycle. And remember, all of that went to the Democrats. The book is at its most innovative in the second section, when exploring the contours of the new “movement” politics of the right. Rovira Kaltwasser returns to three game-changing examples from the s: the administrations led by Presidents Fernando Collor in Brazil, Carlos Menem in Argentina and Alberto Fujimori in Peru.